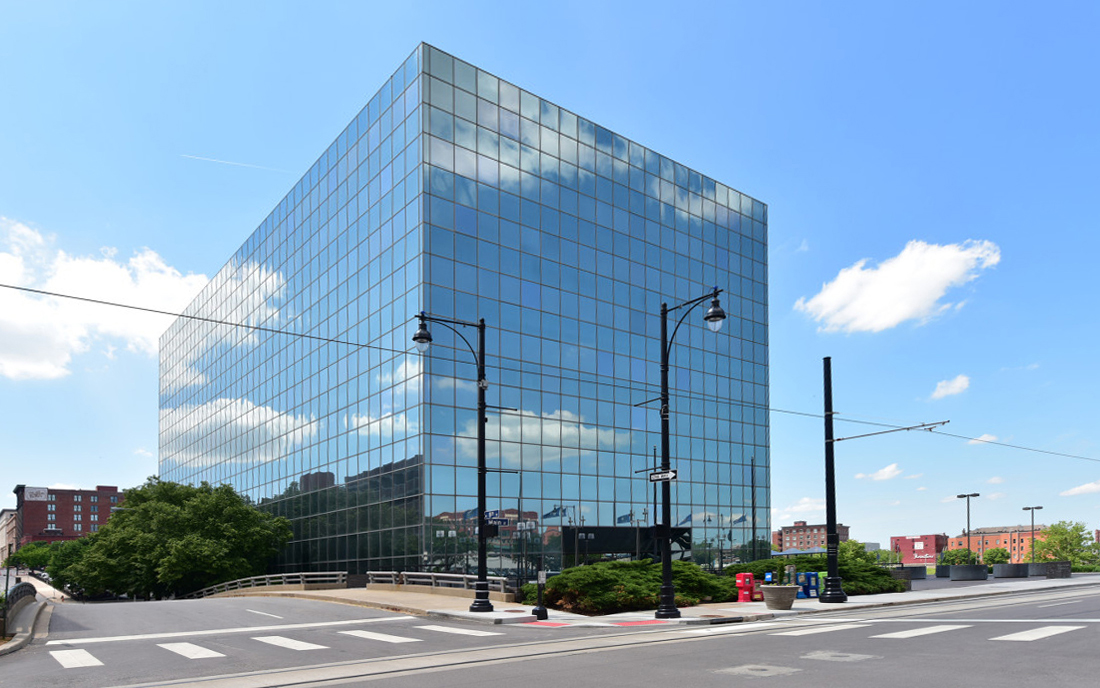 The Flashcube
This not your traditional historic building

A historic tax credit rehabilitation is transforming a 1970s office building into residential apartments in downtown Kansas City. This not your traditional historic building. As such, it offers some unique lessons about applying the Standards for Rehabilitation to mid-twentieth century materials and design.

Hellmuth, Obata, and Kaussabaum (HOK), in collaboration with local architects Keene, Simpson, & Murphy, designed the nine-story Executive Plaza Office Building in 1972. Construction was completed in 1974. From the start, the public affectionately nicknamed it the “Flashcube” a comment on its exaggeratedly abstract reflective glass curtainwall comprised of a thin-mullion continuous grid that encloses the rectangular building mass.

The design epitomizes the Late-Modern architectural style. Rosin Preservation nominated the building to the National Register as an exceptionally significant expression of this genre and as an ultimate expression of the Modern Movement curtain wall. As such, the building met Criterion Consideration G for achieving significance prior to the standard fifty-year age threshold.
While the building was generally in good condition, the distinctive curtain wall had numerous panels with cracked or broken glass or broken seals that allowed moisture to infiltrate the insulated glazing unit. Previous efforts to spot-replace broken glazing fell short of providing a true match to the original glass, which itself had faded over time. Even if replacement panels were made to the original specifications, they would stand out next to original glazing. The result was a patchwork of various shades of blue, green, and pink. Adding yet another type of glazing would further compromise the building’s primary character-defining feature, the uniform glass walls.

The developer proposed to replace all of the glass with panels that matched the historic insulated glazing units in size, thickness of pane, color, and reflectivity. A unfaded sample from a protected area was used to match the new panes. New grey mullion caps matching the historic material in width, depth, color, and finish sealed the frames. The proposed treatment presented in the Part 2 application was evaluated for its conformance to the Secretary Standards for Rehabilitation. The existing condition and proposed treatment illustrate how the two components of Standard #2 can be in direct conflict.

In this case, retaining and preserving the historic character of this property, specifically the uniformity of the reflective glass on all elevations, required removing and replacing any original glass. The work was approved and performed as proposed. The renewed uniformity of the reflective glass curtainwall, the building’s primary character-defining feature, restored the highly abstracted appearance of the Flashcube.

The project required an innovative interpretation of the Standards to address an application of materials that was unique to the mid- to late-twentieth century. In this case, restoring the entire exterior façade cladding was deemed more important than “losing” any extant historic elements.