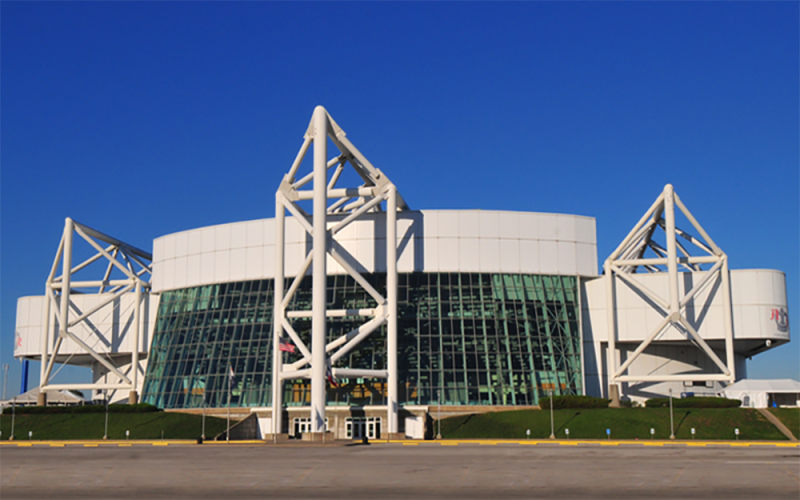 Every National Register nomination teaches us something new – about architecture, events, communities, people and our shared history. Kemper Arena was no exception. It is a very specific type of building constructed at a distinct point in time – a civic investment that complemented American prosperity in the late post-war period.

In a 1969 Sports Illustrated article, journalist Frank Deford wrote, “The arena… is the building for this time…. It is a phenomenon that all by itself is changing the entertainment habits and sporting interests of millions.” It was a building type that quickly became integral to a community’s psyche and self-perception, responding to a community that said: We have free time and money in our pockets, entertain us.

This was very true locally, where Kemper Arena quickly became a touchstone for a generation of Kansas Citians. As needed, the concrete floor was easily topped with ice, wood, turf or dirt.

Since it opened in 1974, Kemper has been home to professional hockey, basketball and indoor soccer teams. It hosted wrestling, roller derby, figure skating and gymnastics competitions and Division I college basketball tournaments. You went to Kemper to see the circus, the ice show, the rodeo and monster truck rallies. Muhammad Ali staged an exhibition bout there. It was the site of the 1976 Republican National Convention. The American Royal and Future Farmers of America convention were annual highlights.

Perhaps Kemper’s most important role was as a regional venue hosting large, popular musical concerts. Not only for those in the metro area, but for people living in the small cities and rural towns across the Midwest and the Eastern Plains. Over the course of this project, the strength and potency of personal memories attached to Kemper became readily apparent. If you came of age in the 1970s or 80s and you lived somewhere in the region bounded by St. Louis, Des Moines, Omaha, Oklahoma City and Denver, chances are you came to Kansas City at least once to see a concert at Kemper. If there was a band that played big shows anytime between 1974 and 2007 before the Sprint Center opened, they played Kemper. The list is long, comprehensive and crosses many genres: Frank Sinatra, Johnny Cash, the Rolling Stones, Cher, Motley Crue, the Beastie Boys, Jay-Z and Yanni, to name a few.

This generation of arenas began to lose its luster in 1988, after the Palace of Auburn Hills was built for the Detroit Pistons. That venue changed arena economics by upping the game on customer amenities. Kemper was built with 25 private viewing boxes, which were something of a novelty in 1974. Where these boxes generated combined annual revenue of $360,000, each of the 180 luxury suites at the Palace of Auburn Hills generated annual revenue of $200,000, or $3.6 million total. By sharing the additional revenue with team owners, local teams developed star power. The Pistons, coincidentally or not, went on to win two NBA championships after moving into their new arena. It soon became obvious: older arenas had become economically obsolete. This triggered a wave of new arena construction, and also a trend of demolishing older arenas. The loss of other mid-century arenas nationwide enhances the significance of Kemper.

The road to historic designation for Kemper Arena was long and winding. Significant challenges included the building’s relatively recent construction — eight years shy of the 50-year threshold — and major exterior alterations made in the mid-1990s. Designation was never a sure thing until the National Park Service signed off on the final draft.

Due to the building’s age, any viable argument would need to withstand the scrutiny of “exceptional significance.” As we delved deep into local, regional and national repositories, the Rosin Preservation team explored multiple approaches to the question of significance, including the building’s unique architecture and engineering. Our strong relationships with state and federal reviewers allowed us to engage them early in conversation. This collaborative approach was critical as we distilled our argument and, ultimately, won National Register designation.

With National Register status officially secured on Sept. 9, 2016, the developer, Foutch Brothers, was able to move forward with redeveloping the arena. Their plan will create a youth and adult recreational sports destination using state and federal historic tax credits, and includes a partnership with Mosaic Life Care to establish an on-site sports medicine clinic. This project will breathe new life into a building that has a strong hold on Kansas City’s collective memory. Foutch Brothers’ plan will repurpose a sound piece of community infrastructure into a 21st century asset that is a natural evolution of the building’s origins.