CASE STUDY No. 11 | From deterioration to revitalization 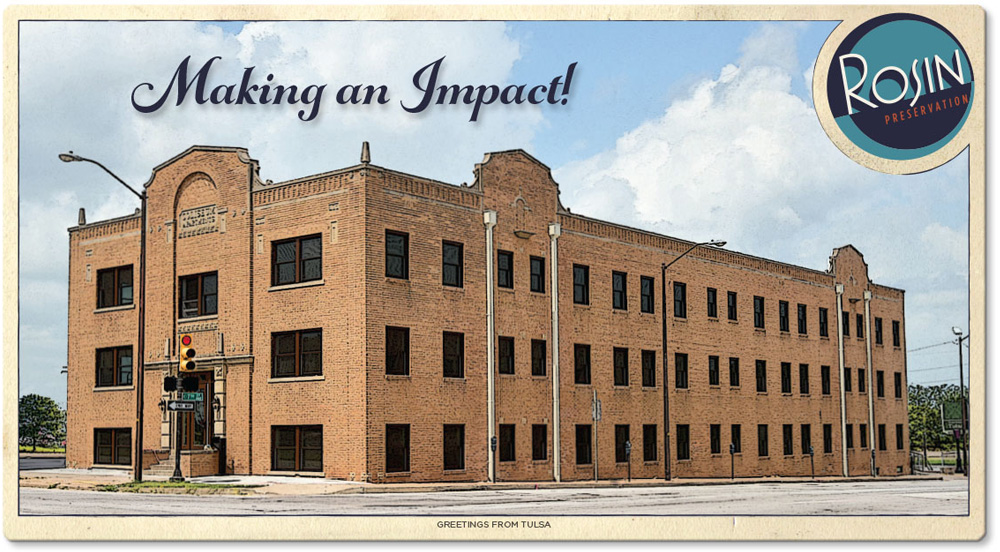 The Coliseum Apartments were built in 1925 to provide workforce housing in downtown Tulsa during the oil boom. The building offered compact but comfortable, one-bedroom and studio apartments flanking double-loaded corridors on three floors. By 2014, the building had fallen into extreme disrepair. Rosin Preservation worked closely with the developer and the design team to make sure the program met the Secretary of the Interior’s Standards, paying extra attention to document the deteriorated windows and to ensure the selection of an appropriate replacement. The building leased quickly and has been heralded as a preservation success in downtown Tulsa.

CASE STUDY No. 10 | From unoccupied skyscraper to luminous living

The Kansas City Power & Light Company erected a new building for its company headquarters in 1931. An instant icon on the burgeoning Kansas City skyline, the massing of the Art Deco masterpiece features distinct setbacks at multiple levels, capped by an internally illuminated “lantern.” When NorthPoint Development acquired the largely vacant property in 2016, it was able to capitalize on the downtown housing and rehabilitation trend to transform the building. Rosin Preservation worked closely with the team to ensure that all of the lush Art Deco design elements were preserved and provided guidance to make certain that the new six-story apartment building and parking garage, built on the lot to the north, would be compatible with the historic building design and support the historic tax credit project. 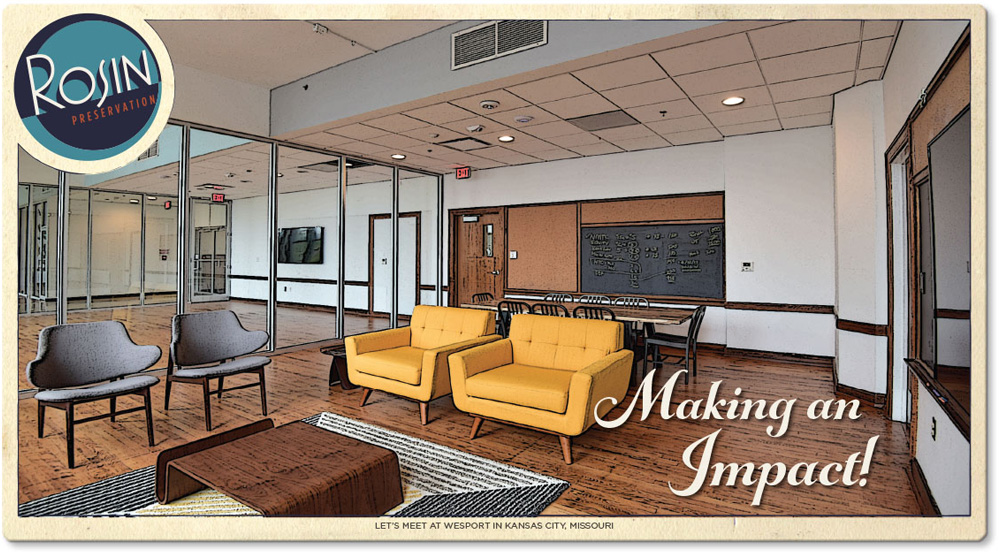 Westport Middle School opened in 1924 as Kansas City’s first purpose-built junior high school. After the school closed in 2011, finding an appropriate new use for the large building posed a challenge. In 2015, HP Development Partners stepped in with a bold plan that proposed using historic tax credits and new markets tax credits to convert the middle school into an innovation hub for emerging businesses. The plan would include low-cost office space for start-up and emerging businesses as well as resources for community use. Rosin Preservation worked closely with the developer and the design team to make sure that the new open office plan meshed with the historic configuration of spaces to meet the Secretary of the Interior’s Standards.

CASE STUDY No. 8 | From incorrect architectural renovation to appropriate details 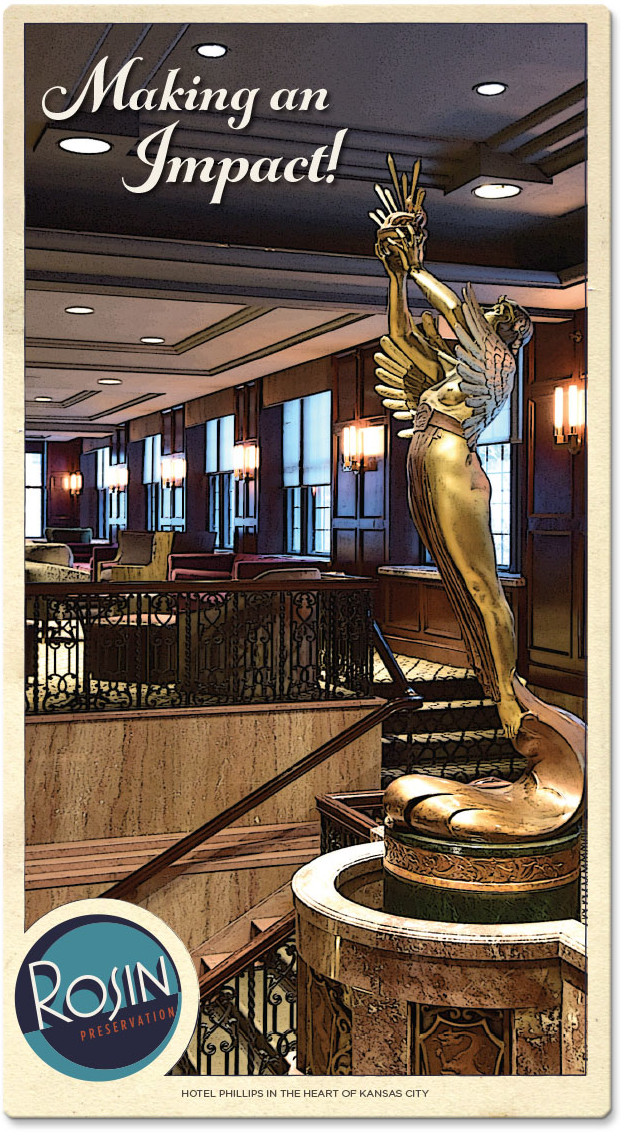 The Hotel Phillips has been an elegant destination for visitors to Kansas City for more than eight decades. A project of noted hotel and apartment developer Charles Phillips, it opened as Kansas City’s tallest hotel in an era when the construction of skyscrapers was rapidly shaping the city’s skyline. Having worked on the rehabilitation in 2001, Rosin Preservation was thrilled to be part of the Arbor Lodging project team for the latest efforts, which focused on restoring the lost elegance of the public spaces while freshening the guestrooms. Historically inappropriate elements were removed from the lobby and the ceiling was painted black to mimic the original ceiling. In the lower level, rich historic Jacobethan finishes were restored and a storage area was converted to a speakeasy.

CASE STUDY No. 7 | From old bank to new offices 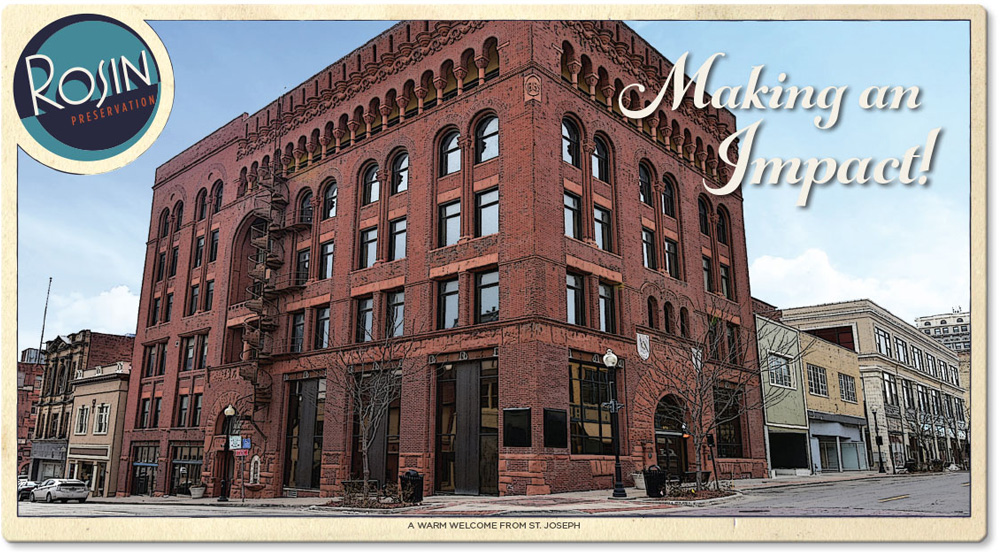 The Richardsonian Romanesque design of the 1889 German American Bank Building is a hallmark of the Victorian commercial architecture that identifies downtown St. Joseph. The building served the community as a bank for more than a century. Recently, downtown St. Joseph was in need of a spark to kickstart economic revitalization, and that boost came when local health-care provider Mosaic Life Care purchased the building. Rosin Preservation worked closely with the development team and the project architects to identify the building’s character-defining features and to develop an appropriate rehabilitation strategy.

CASE STUDY No. 6 | From odd façade to original grace 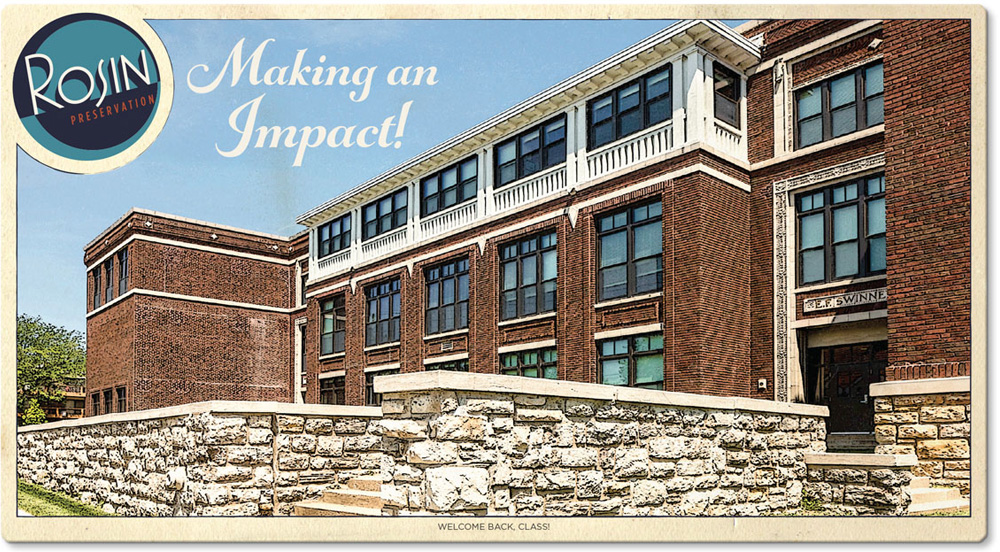 The E. F. Swinney School educated Kansas City students from 1914 until 1997. The location just blocks west of the Country Club Plaza drew a lot of interest when the property became available for redevelopment, but a large circulatory element added to the front of the building in 1987 proved to be a stumbling block. Even though the original building was hardly altered, the State Historic Preservation Office would not evaluate its National Register eligibility until the addition was removed. Rosin Preservation worked closely with Swinney Development Partners to mitigate the risk of moving forward by researching the design of the addition and physically exploring how it had altered the original façade. Renamed West Hill, the apartments opened to great acclaim in 2016, bringing new vitality to the neighborhood.

CASE STUDY No. 5 | From empty hall to hot spot 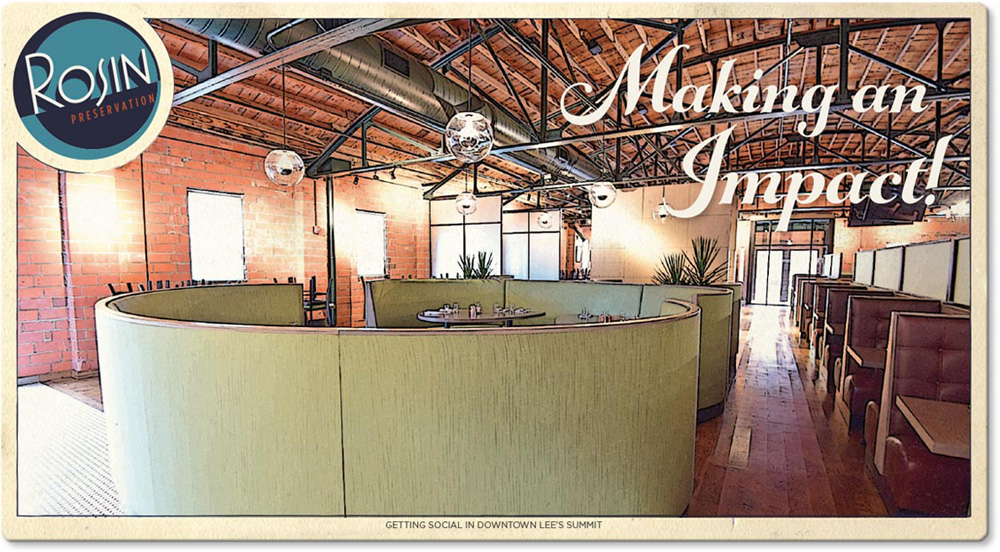 The Sherwood Manufacturing Company erected a small industrial building in 1946 to house its growing business. In 1950, local resident Joseph Arnold purchased the building and donated Arnold Hall to the city for use as a community gathering space. After a new City Hall opened in 2005, Arnold Hall sat vacant. Eventually, it caught the attention of restaurateurs Andy Lock and Domhnall Molloy, who were looking for a unique space to house a new dining experience. Working closely with architects at DRAW, Rosin Preservation helped the restaurant team secure historic tax credits as they transformed the forlorn building into a downtown gem with a new bar, banquettes and private dining spaces to complement the building’s historic features.

CASE STUDY No. 4 | From shuttered store to luxe lofts and more 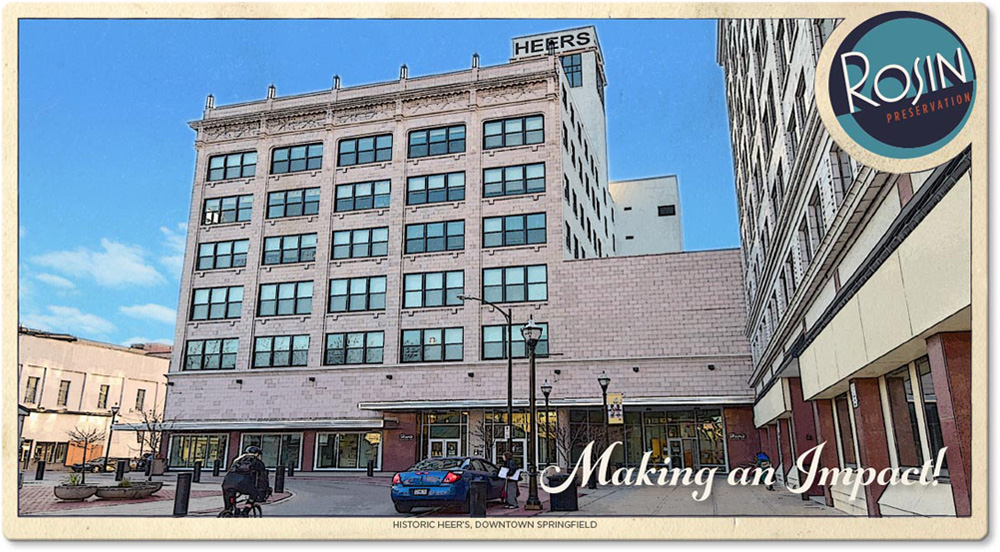 Heer’s Department Store became a fixture in downtown Springfield in 1915, housed in an elegant eight-story terracotta-clad building anchoring the public square. After serving generations of shoppers, Heer’s Department store closed in 1995, and the building languished. Starting in 2013, Rosin Preservation worked closely with the Dalmark Group developers, architects from Rosemann & Associates and contractors with Straub Construction on a rehabilitation of the building that recovered essential historic elements. Now it has a major commercial tenant and 80 apartments. A century after Heer’s Department Store first opened, local civic leaders heralded the opening of Heer’s Luxury Lofts in 2015 as a catalyst for further development in the revitalization of downtown Springfield.

CASE STUDY No. 3 | From vacant school to living cool 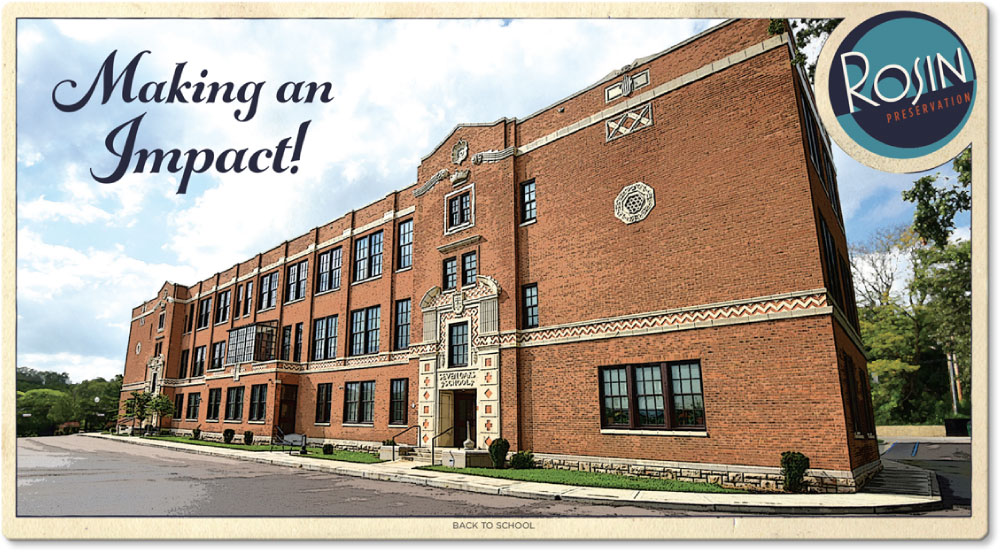 Seven Oaks School opened in 1927 to serve more than 400 elementary students living in the growing neighborhoods nearby. Local children attended the school for 70 years before it closed in 1997. The building stood empty and deteriorated. Efforts to rehabilitate grew out of the Kansas City Public Schools Repurposing Initiative. Seven Oaks Estates rehabilitated the property, preserving historic elements including a small stage, original seating and decorative plaster in the auditorium as a shared community space. All apartments were leased shortly after opening in 2014.

CASE STUDY No. 2 | From car parts to celebration of arts 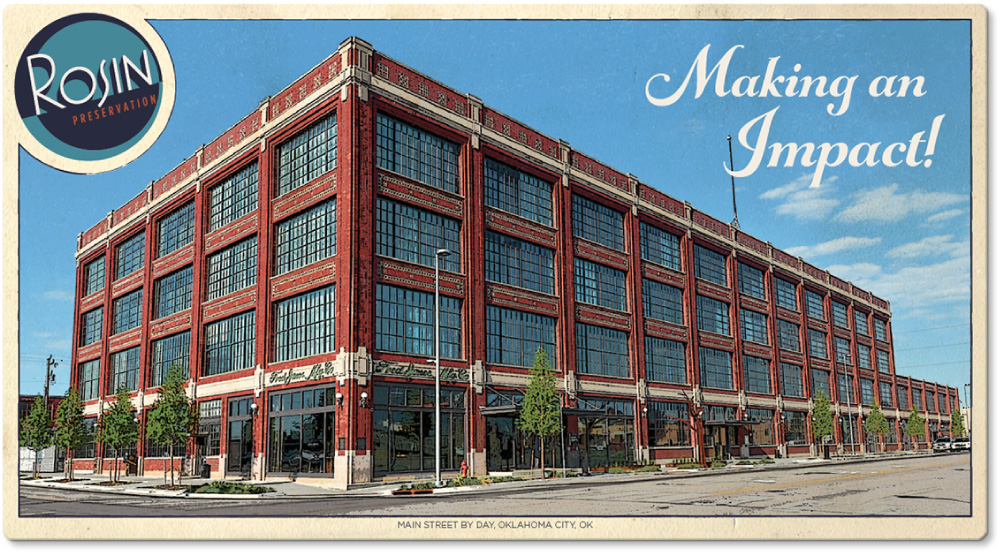 In 1915, the Ford Motor Company commissioned renowned architect Albert Kahn to design an assembly plant to rev up production in the early era of the American automobile. In 1968, the Fred Jones Manufacturing Company purchased the recently closed Ford assembly plant and operated a parts distribution center until 2013. 21c Museum Hotels identified it as a perfect location for its boutique hotel and chef-driven restaurant concept. The rehabilitation showcases contemporary art within the building’s historic surroundings, highlighting both aspects through juxtaposition.

CASE STUDY No. 1 | From dangerous building to downtown destination 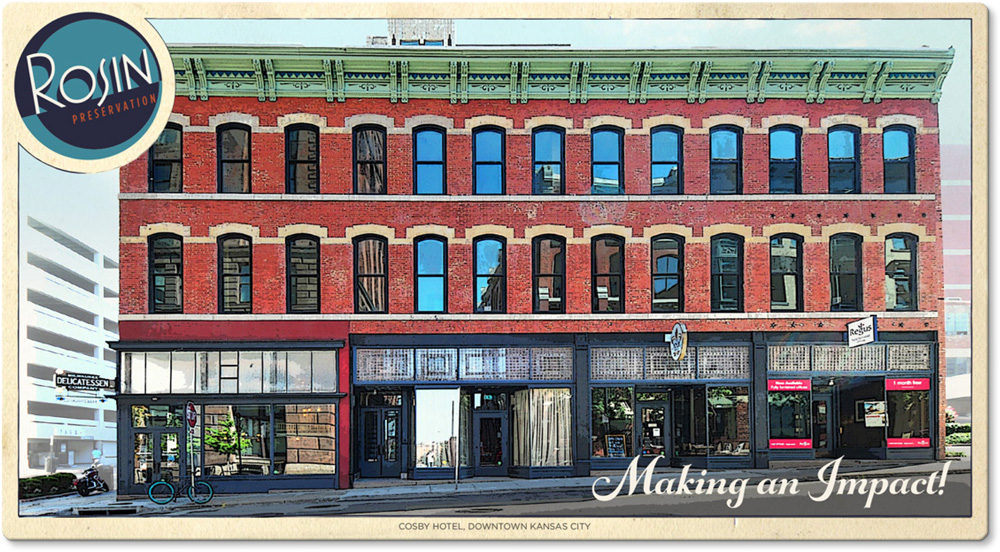